A review from a friend


I just wanted to share this review of Carrot Shaped Stick from a very dear friend of mine. Stuart explains below how we know each other and all I asked for was a short paragraph. What I got was what I should have expected from a man who never does anything by halves:

“Would you review it?”.  That was the question posed by Loz, which took me aback somewhat. 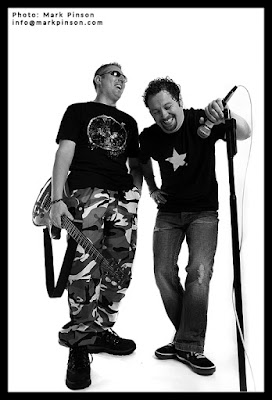 I’m not a music journo and have never written an album review in my life!  Not only that, but Loz and I go back over 25 years during which we have spent significant periods together in rehearsal rooms, recording studios, on stage, and rolling with all the crap that goes on between musicians (I can recall more than one occasion of shouting matches between us!)

Hardly the basis for an impartial review you may shout?   Well, that could be one perspective.  Another could be that after decades of playing (and shouting!) with Loz, I may have just earned the right to also be his biggest critic.

So, with the challenge accepted, what to make of Loz’s new album Carrot Shaped Stick?

Followers and fans of Loz’s music will be familiar with his style of writing and production from previous releases Not The Only One (2005), Spoiling It For Everyone (2008) and The Futile Adventures of Bitter & Twisted (2012).  However, a couple of significant differences to these releases are immediately evident upon first listen to ‘Carrot’.

First and foremost, there is a major change in the approach to the vocals throughout the album.  Aside from a more relaxed style overall, the astute listener will pick up on multi layering of vocal parts in the mix, including double and triple tracked lead and harmony parts in the versus and choruses of many of the songs.  This is in contrast to a more traditional single vocal approach in previous releases, and significantly expands the depth and impact of the vocals and lyrics throughout.

Second, the pacing of songs is more measured, underlined by a more reflective approach taken with song subject matters.  The resulting ‘feel’ of this album overall is that it comes across as a more ‘collective’ body of songs that ebb and flow more seamlessly with one another.

Turning to the songs, Tomorrows Children kicks off the album, combining simple but effective piano chords riding over simmering synthesiser layers, asking what will become of the generations being brought up in a virtual narcissistic and manipulative world (‘winners? losers? leaders? dictators? heroes? killers? creators? destroyers?).  A thought provoking start.

Next Silent Fury, with lyrics co-written with Lucy Jones, takes things up a notch with its electronica bass groove and lo-fi robotic vocal effects.  At this point I will mention the break starting at 1.54, where the tempo drops off for a mid-section before getting back into gear for the final verse.

While mid-section breaks can allow listeners to have a breather, equally momentum of a song can also be lost.  This type of formula is found in seven of the album’s tracks, and while its fair to say most songwriters develop a style that identifies as their ‘trademark’, repeating the same formula too regularly can also become predictable.

A poppy Plastic People then follows.  Containing exquisitely wry observations on the superficial incompetent transient bull-shitters that stalk the corporate world (we all know at least one!), this could easily be a single.   In similar style to material by Reverend & The Makers, the humours and trenchant lyrics are so on point that I laughed out loud on more than one occasion.

Together Alone then takes the pace down, riding through the swells of the sea of life with some deep reflections on commitment, decisions, regrets, strengths, love and togetherness that can only be understood by those lucky enough to be lifelong soul mates.

The brooding intro to Heat of the Sun leads into an Elbow-esq anthem that would not be lost on any stadium audience.  The synth loop starting at 1.42 has echoes of The Who’s Baba O’Riley, with backing harmonies in the choruses adding an almost evangelical feel before the key change at 3.22 taking the song to its final soaring crescendo. 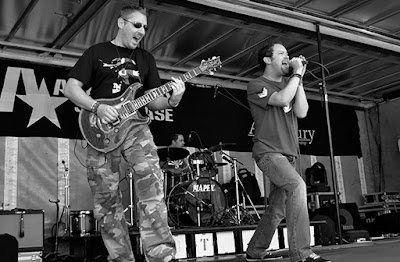 A grinding Disconnected brings things back to earth looking at our failures to learn from history when people become disaffected with the world they are living in, underpinned by a thought sobering lyric “take a selfie as the water turns red”.

Next up is Blabbermouth – a punchy groove overlayed with sirens and jangly guitar that camouflage some dark warnings of revenge for past upsets (“Are you having fun? Your time will come. I’ll be there to remind you when you’re battered and bruised”).  Whoever ‘Blabbermouth’ is, they have been forever incarcerated in this track (“You got your name on my song!”) who would do well to keep one eye over their shoulder!

Sitar and acoustic guitar intertwine in Lucky Escape John, giving a clue to its subject matter - which ponders how John Lennon would have fared in the digital age of social media (‘Imagine’? – sorry couldn’t resist!).  Despite a momentary anomaly between instrument frequencies in the mix leading into the choruses, this contains some nice vocal layering in the chorus with the building keyboard solo taking the song to its end.

Following this, chugging guitar and bass and a bluesier chord structure underpin an impassioned and almost exasperated No One Asking Why and its questioning of the support given to mental health issues.  Wild Wishes then blends a more 90’s indie rhythm with 80’s style keyboard and synthesiser sounds, and although a pleasant listen, feels a tad directionless at times and maybe one of the weaker tracks overall.

Invisible Again starts with a spaghetti western movie feel before moving aptly onto its theme of being lost in the ‘wild west’ world of city life and its “miles of curved glass” where “thousands of people pass.”  Crashing power chords in the choruses and flanged guitar warmed through a Leslie speaker effect in the verses provide some nice light and shade throughout.

Things then ramp with the defiant and highly catchy Coming Back To Life.  The combination of synth hooks and gated guitar treatments are reminiscent of some of producer Mutt Lange’s work, and along with Plastic People is strong single material that deserves to be all over the radio playlists of the country.

Kingdom of the Blind closes the album, highlighting the perverseness of non-creative people telling creative people how to ‘create’ (“you wanted me to make things, then you told me what to make”), its energy sapping feel framed through the chorus’s descending spiralling chord progression and heavily tremolo effected vocals.

As Loz notes on his website, Carrot Shaped Stick was recorded, mixed and mastered at home.   The last time Loz released a similar type of production was Not The Only One in 2005, and this new album demonstrates how far his song writing, composition and production skills have advanced since then.

The detail and subtleties in this album are almost endless; while the songs themselves remind us that inspired song writing about serious issues is not (yet) a lost form of art.

This is a very personal and powerful piece of work, which demands more than just a cursory glance.